In 2004, I returned to New York City, after three years of living in the alternate universe known as Tokyo. I currently work in at a bank, snap pictures occasionally, and travel as much as I can.

The Japanese, as the world greatest fashion victims, provided constant amusement for me, especially from the knees down: fur and sparkles comprise daily footwear. This fascination provided inspiration for this site’s name: TokyoShoes.

I originally conceived of this as a way to share my experiences in Tokyo with friends and family, debunking as many myths about Japan as possible along the way. For some reason, someone over at Japanzine deemed TokyoShoes worthy of a “Best of Japan on The Web 2003” award and Metropolis Magazine interviewed me for an article on blogging. 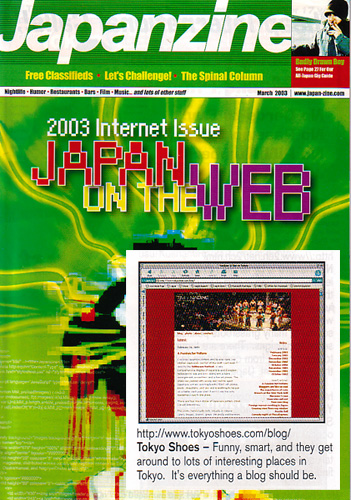 My struggles with HTML led me to write a popular Blogging for Beginners guide cited by Ask Yahoo! who wrote:

Now, pay very close attention to this excellent introductory tutorial written by Nadine of the wonderful blog TokyoShoes. Described as a “blogging for dummies,” it offers cogent, step-by-step instructions on how to set up a blog using a popular program called Movable Type. You’ll find a handy glossary of relevant terms, as well as tips on the nuts and bolts of domain names and web hosts.

and Instapundit who wrote:

A NIFTY MOVABLE TYPE TUTORIAL FOR BEGINNERS. If nothing else, it should reduce the apprehensiveness of people who are thinking of switching from Blogger.

As there is Chinatown in New York, there is “little gaijinville” in Tokyo, an area with a high concentration of foreigners and the stores and restaurants that cater to them. That’s where I lived.

At first I worked at a bank, then for the UNU. Work life was nearly indistinguishable from home, except for all that bowing and business card (meishi) stuff.

In Japan I was intrigued by the shop windows of high end brands, became obsessed with the girls of Harajuku, perfected a mean yakitori, positively failed at learning Japanese, traveled as much as I could, and took a few pictures. No, I was never once groped on the subway, nor did eat sushi all the time. Yes, I saw THAT movie. Anything else you want to know simply peruse the archives.

Back in The City

I originally moved to Manhattan for school and couldn’t wait to escape the suburbia of my childhood. New York was the utopia of my dreams offering me anonymity, opportunity, and variety. It was pure magic.

It was a miracle I ever left the City. In fact for 10 years I rarely ventured off the island of Manhattan, and in the later years seldom went beyond the plot of land south of Houston and north of Wall. But leave I did, for 3 years to Tokyo, the fodder that provided inspiration for this blog.

Now I am back in the city, I find it different, and the same, somehow too familiar. My question is, will it be magic again?

One day I finally got tired of traveling to amazing places and having my pictures look like crap. I enlisted a few photography friends to teach me the basics and I took a photography class at FIT.

I confess I photoshop, some pictures more than others, generally upping saturation. I shoot with a Nikon D80.